The aim of the research group is to develop and scientifically evaluate high-precision methods for proton therapy and to transfer them into clinical application as quickly as possible. The ultimate goal is the development of tomorrows proton therapy, including a verification and adaptation of treatment in real-time.

The setting at OncoRay offers optimal conditions: A modern proton therapy system with in-room dual-energy computer tomography and an experimental research area and especially the close connections and interactions between the research physicists, clinical physicists and the physicians.

The challenging goal is tackeled from different directions in parallel. Currently, the following topics are under investigation:

The slowing down of protons in the patient depends very much on the different tissues types passed. It is therefore extremely important for treatment planning to distinguish individual tissues and to be able to determine their properties as accurately as possible. The research group is investigating the potential of dual-energy computed tomography (DECT) for this purpose. In contrast to conventional computed tomography, this innovative imaging technique involves two CT scans with different x-ray energies. Together, they provide specific information on the composition of the tissue. The scientists were able to show that DECT offers considerable advantages for proton treatment planning that are highly relevant for clinical use. Based on the worldwide first implantation of direct DECT-based treatment planning in 2019, the range uncertainty of the proton beam was substantially reduced from 3.5 % to 2%. This allows a more precise tumor treatment as well as a better protection of normal tissue.

The actual penetration depth of the proton beam and thus the location of the greatest dose deposition are difficult to measure. This becomes possible with a so-called prompt-gamma slit camera, developed by the company Ion Beam Applications (IBA).  In close cooperation with the group "In-vivo Dosimetry for New Radiation Types", the group "High Precision Radiation Therapy" made numerous measurements and technical improvements enable the worldwide first clinical application of this technique. Currently, the clinical benefit of this unique treatment verification technique is systematically investigated in a clinical trial using an improved 2nd generation prototype system. A further aim is the automatization of the evaluation of the complex data in real-time with the help of sophisticated artificial intelligence solutions to allow a real-time detection of treatment deviations and a subsequent immediate intervention.

The treatment plan determines which area of the body is to be irradiated with a certain dose. Treatment takes place over several weeks; therefore small deviations may occur, for example in the positioning of the patient or in the presence of air inclusions in the body. In addition, anatomical changes can occur in the course of the therapy, for example the tumor can shrink or lymph nodes can swell. The scientists are aiming for treatment plans for which deviations have as little influence as possible on the quality of the treatment - in other words, the irradiation plans are robust against these changes. At the same time, the researchers are investigating the conditions and optimal time point of a treatment adaptation in order to guarantee the best therapy for the patient.

Reconstruction of the actually delivered dose for moving-target treatments

Many tumors in the body move, for example lung tumors. In order to enable a precise treatment, it is necessary to take into account the movement of the tumor and the surrounding risk organs caused by respiration. Due to the influencing variables on the temporal-spatial sequence of tumor and beam movement, it is almost impossible to accurately predict the actual delivered four-dimensional dose distribution. One research focus of the group is the reconstruction of the actually applied dose on the basis of collected information from (a) 4D imaging directly before irradiation, (b) respiratory signal of the patient during irradiation and (c) the so-called "log files" of the irradiation device. These data can be evaluated after each irradiation fraction in order to indicate any necessary adaptation of the treatment plan during therapy. 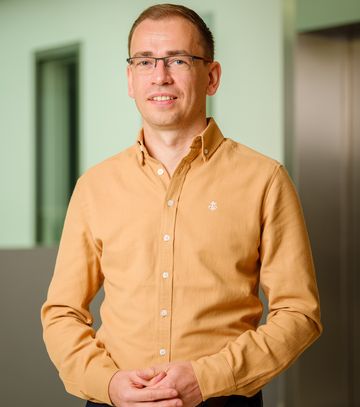